This is a great site that has all cultures and equipment for fermenting.

A fermented milk Caspian Sea Yogurt is also called matsoun or matsoni is also known as Caucasian sour cream or Bulgarian yogurt and you'll find some recipes using  matsoni. Caspian Sea Yogurt is NOT Kefir. According to Kaoru Akatani, a senior researcher at the Louis Pasteur Center for Medical Research, who conducted a study on Caspian Sea yogurt made at more than 20 households, research shows that CSY has two major bacteria; lactococcus cremoris and gluconobacter sp.Lactococcus cremoris turns milk into yogurt with or without oxygen present, and result in the yogurt's unique viscosity. Gluconobacter sp.,  multiplies only in the presence of oxygen, and help lactococcus cremoris multiply. 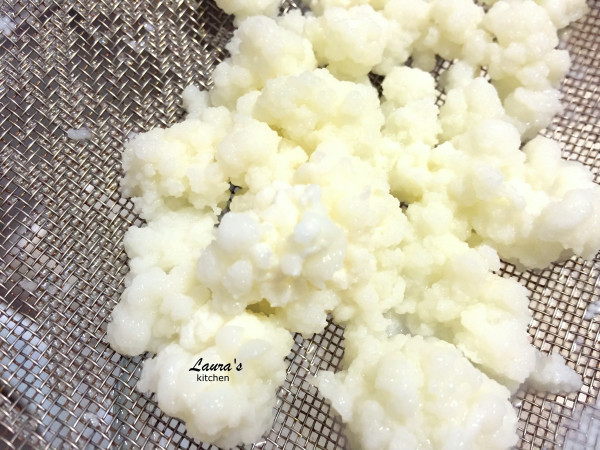 Lactococcus cremoris multiply most at 20 C (68 oF) to 30 C, (86 oF)  which falls within the range of normal room temperatures and does not have to be cooked or go through lenghtly preparation as regular yogurt. You don't even need a yogurt maker.

Super Health Elixir. Practically a meal by itself. Or add fresh fruit, nuts or honey. Both my 2 year old and my 8 year old actually ask for this.  Imagine - healthy food you're kids will ask for ! Don't you wish your milk could do all that!

This digital thermostat is an electronic temperature control device that allows you to select and maintain optimum temperatures. Has an easy to read dial setting (color coded) from 68 to 100 F.

Tibetan milk mushroom is found more seldom than other zoogloeas. But those who succeeded in finding the Tibetan milk mushroom are really lucky, as it is not only useful but has an extraordinary pleasant taste that cannot leave indifferent even the most tempted gourmets. If you have firmly decided to taste the milk infusion first of all address to the acquaintances, relatives and neighbours. Some of them certainly have the milk mushroom and will cheerfully share it with you.

What is Tibetan milk mushroom?

For the first time Tibetan milk mushroom was discovered over three hundred years ago. Unfortunately, there is no information on how it has been found, and the only thing we know its native land is Bulgaria. And still, what is Tibetan milk mushroom? It is a symbiotic organism the basis of which is sour-milk active bacteria by means of which they are being developed. Generally, the milk mushroom is the unique culture having no analogues of the character and structure, and of influence on a human body. The milk mushroom contains a large quantity of useful bacteria and substances that singles it out of modern sour-milk products.

The result of milk mushroom influence

According to historical observations of scientists, the Tibetan mushroom possesses a number of medical properties. Its curative action was already described hundreds years ago. According to historical references «the Tibetan milk mushroom enables to treat allergies quickly and painlessly even exceeding results of the checked methods». Nowadays it is already officially proved strains of the microorganisms that are the Tibetan milk mushroom, influence effectively treatment of inflammatory diseases. The infusion helps to restore organism in the postoperative period promoting healing of wounds. Naturally, the priority value of the Tibetan mushroom is still a treatment of such diseases of gastrointestinal tract as gastritis, pancreatitis and also exacerbation of ulcer.

Идеи ремонта, фото
all the articles

Tibicos
Preparation
The basic preparation method is to add tibicos to a sugary liquid and allow it to ferment 24 to 48 hours. A typical recipe might contain the tibicos culture, a citrus fruit and water. It is important to not use ingredients that will inhibit the fermentation, such as chlorine in tap water or preservatives in dried fruit (sulfites). The fruits used may be changed and mixed to create different flavors.
Additional precautions should be taken to keep the cultures healthy. The use of reactive metals such as aluminium, copper, or zinc should be minimized, since the acidity of the solution can draw these metals out, damaging the culture. The beverage should not be stored in metal containers, as these may leach into it over time. Instead, use stainless steel, plastic, non-lead-glazed ceramic or glass containers. Culturing grains in a glass jar and using clean stainless steel or plastic utensils when handling the grains is recommended.
Origin
Tibicos are used to brew a variety of tepache known as tepache de tibicos.[6] The ginger beer plant is also a form of tibicos. Kebler attests that they were used in Kentucky circa 1859 to brew a "home drink" and were referred to as "japanese beer seeds".
Tibicos are found around the world, with no two cultures being exactly the same. Typical tibicos have a mix of Lactobacillus, Streptococcus, Pediococcus and Leuconostoc bacteria with yeasts from Saccharomyces, Candida, Kloeckera and possibly others. Lactobacillus brevis has been identified as the species responsible for the production of the polysaccharide (dextran) that forms the grains
Different ingredients or hygienic conditions might also change the fungal and bacteriological composition, leading to the different names. People who do not wish to consume dairy products may find that water kefir provides probiotics without the need for dairy or tea cultured products, such as kombucha. The finished product, if bottled, will produce a carbonated beverage. It will continue to ferment when bottled thus producing more carbonation—so bottles need to be capped loosely and allowed to breathe, or they may become explosive.
Tags: fermenting, kefir, kombucha, probiotics, tibicos
Subscribe